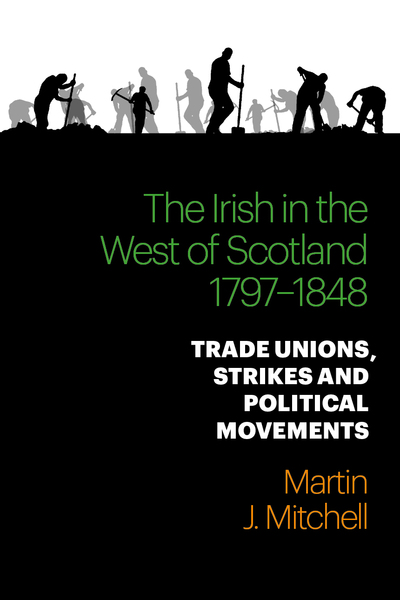 The prevailing historical view of the Catholic Irish in the first half of nineteenth-century Scotland is that they were despised by native workers because of their religion and because most were employed as strike-breakers or low-wage labour. As a result of this hostility, the Catholic immigrants were viewed as a separate isolated community, concerned mainly with Irish and Catholic issues and unable or unwilling to participate in trade unions, strikes and radical reform movements. The Protestant Irish immigrants, on the other hand, were believed to have integrated with little difficulty, mainly because of religious, families and cultural ties with the Scots.

This study presents a radically different view. It demonstrates that, whereas some Irish workers were used as a blackleg or cheap labour, others participated in trade unions and strikes alongside native workers, most notably in spinning, weaving and mining industries. The various agitations for political change in the region are analysed, revealing that the Irish – Catholic and Protestant – were significantly involved in all of them. It is also shown that Scottish reformers welcomed, and indeed actively sought, Catholic Irish participation.

The campaigns for Catholic emancipation and the repeal of the Act of Union of 1800 are reviewed, as are the attitudes of the Scottish Catholic clergy to the political activities of their overwhelmingly Irish congregations.